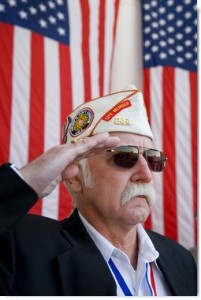 I am a veteran.

I didn’t fight in any war when I joined the Navy in 1974 but because our nation’s involvement officially ended after the events surrounding the fall of South Vietnam in 1975 I am called a “Vietnam Era Veteran.”

That doesn’t mean a lot, especially to those who actually fought and endured the unimaginable in Vietnam. But we couldn’t stop having a Navy after Vietnam and somebody had to steer those ships and swab those decks and, in my case, push and type those papers. Someone had to do it during a time when being in the military wasn’t the coolest thing a young person could do.

Although my parents had a Navy sticker on their pickup — I was the third son to join the Navy — you didn’t see ribbons on cars with the names of their soldier boys who were serving listed on it. You didn’t see every sunshine patriot and vote-needy politician calling those of us  who served “heroes.”

You can bet your ass that I bitched and moaned throughout my tour of duty. It’s what service members do. There were petty, little regulations that seemed absolutely stupid. You could often find yourself following your orders from a tyrant, but unlike in the civilian world you couldn’t talk back or couldn’t quit because you could end up end trouble. The worst case scenario would be the brig, or jail. Those Marine guards in the brigs didn’t exactly play nice, at least that’s what I heard. Remarkably, I never — officially — got in trouble and wound up with an Honorable Discharge and a Navy Good Conduct Medal. The last I figure was quite an achievement considering all the hell-raising I did both on and off duty.

So I am no hero. I was just a kid out of high school who needed a job, wanted badly to attend college but couldn’t afford it, the Navy needed someone who did their job and did it very well. After finishing my job, the government paid me a nice little stipend under the GI Bill that made it most helpful to become a college graduate. And the rest is history.

That’s my veteran story. It isn’t a heroic tale but it’s my own and I’m sticking to it.