Today turned out to be even stranger than the day before.

No, my truck wasn’t struck by a flying condom traveling down the freeway like I believe it to have been yesterday. Also, nowhere did I see Houston Mayor-Elect Annise Parker being all Christmasy by donning her gay apparel. Sorry, I just had to use that one. I didn’t see Houston’s first openly gay mayor-elect yesterday either although I mentioned her in this venue.

But the top of my windshield or edge of my truck’s roof did get struck by a brick-sized chunk of what appeared to be concrete as I drove home from Houston to Beaumont on Interstate 10. The piece of whatever it was just seemed to come out of nowhere. It reminded me of a similar incident that I wrote of here. There were plenty of big trucks in the three lanes ahead of me so the chunkaroid could have come from one of them. I wasn’t close to any overpasses, which is good because I am concerned about having an overpass collapse on top of me. I mean, I’m not obsessed with the thought, but with the state of our infrastructure these days you have to keep on your toes. People who are psychopathic or who otherwise have nothing to do occasionally will likewise throw objects onto vehicles from overpasses. I just threw that in to scare the hell out of you.

The strangest part of my day happened as I stood waiting for an elevator at the Michael E. DeBakey Veterans Hospital in Houston. A veteran who appeared to be fairly disabled and was traveling in a rather speedy wheelchair was kind enough to physically accompany me to MRI after I had asked a VA employee in the hospital how to get there. I had been there before and would have eventually found it but this considerate man insisted on showing me how to get there. It was as this gentleman and I were standing at the elevator that a robot rolled silenty up behind us and told us to move so it could get on the elevator.

It turns out this is one of the robots the hospital purchased in 2004. The hospital bought two of the so-called “Helpmate” robots which were named “Jewels” and “King Tut.” I’m sure there is a cute story behind the names. Oh well. The robots are basically rolling couriers that can deliver up to 200 pounds of medications and supplies to different locations in the hospital. They are programmed with a map of the hospital. When they encounter an obstacle such as today, they also have the ability to announce — in either English or Spanish — that something is in the way and then ask that the obstacle be removed. 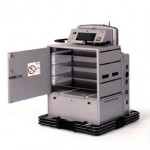 With the disabled fellow and I being the obstacle, I found this walking, talking storage cabinet to be rather imperious. But the way things have been going for me lately, I figured if I said anything the robot might have done something like zap me with death rays. Even if it didn’t I don’t think it is wise to cross a robot with an attitude.

Here is an update for those interested in the reason for my visit to the hospital. I met with the neurologist who turned out to be a good listener. We went over my blood work drawn and analyzed earlier this week as well as previous blood tests, for readings of areas which could indicate a cause for my neuropathy. None of the markers, including thyroid function, were  abnormal with the exception for those tests that might indicate diabetes.

Despite my primary doctors saying I was a “near-borderline” diabetic although not fully over the line, an analysis found that my last test showed a somewhat high reading and an average of the last three tests indicated a bit higher reading than normal. The higher readings appeared to coincide with a very unnerving weight gain over the last six to eight months that my former internist said could have been due to some medicines I am taking.

The doctor also took note that I had been experiencing a shooting low back and hip pain which could indicate a pinched nerve, hence my trip to MRI this morning for an appointment which will be next month to get images of my back.

As I await tests the doctor is adjusting the Lyrica I am taking for the neuropathy and I must seriously begin dieting, no small feat at Christmas season, to see if diabetes or another reason is causing my pain.

I was frank but diplomatic with the doctor in saying that with about a third of the cases like mine being caused by diabetes, I was concerned about a physician just seeing some numbers and immediately focusing on that disease as the cause rather than some of the hundred others. And he indicated that he understood my concern.

So, I go into the holiday season still not knowing what’s interrupting my life but perhaps a little closer to finding out some answers, or not. As for now, I think I’ll be okay if I don’t have dreams tonight about pushy robots.