So sue me. It’s been done before with unfavorable results for the plaintiff. Thankfully.

Not that I expect anyone to sue me but I did say awhile back right here in this humble little blog that I didn’t plan to watch the American League Championship Series pitting the playoff needy Texas Rangers against the World Champions for All Time New York Yankees. I think I saw all six games if I remember correctly. I swore that I wouldn’t though because I expected the Yankees to win as always.  The reason for such a ridiculous resolution was basically that this was a year I didn’t watch baseball.

My team is the Houston Astros. Although I have long considered myself a fan of the Rangers, I am not a fanatic. Of course, neither am I a fanatic about the Astros — especially since they stunk up Minute Maid Park this year — but I suppose I am less of a non-fanatic about the Rangers than the Astros. I have seen both teams play and rooted for both teams in their respective parks. Of course, the last time I actually saw Houston play live and in color was on opening day in 1987 when Mike Scott faced off with Dodgers’ hurler (I wonder if he ever really “hurled?” Orel Hershiser in the Astrodome. It also has been seven or so years since I saw the Rangers play at The Ballpark in Arlington.

I suppose that since the Astros pretty much stunk from the beginning I wasn’t too interested in baseball altogether. To real hardcore fans of the game, that must sound like I am a fair-weather fan. Maybe I am. Yet, like so many other people I have other matters on my plate. Some are important. Truthfully, many are not. I am sure I could have called up one of my Houston friends this baseball season, if they could take a day off because I surely can, and we could have gone to a game. It  just didn’t happen. 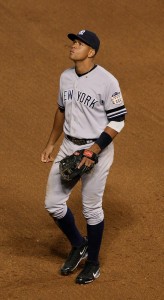 But I will likely watch all of the World Series games with the exception of Saturday because I will be hanging with friends in Galveston. Surely the Rangers can win one game without me. 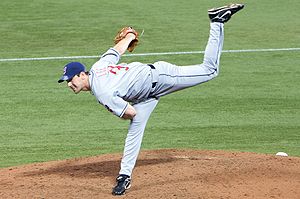 Rangers’ Cliff Lee: I can fly. And throw off the page too.

Beside the fact that the Rangers have never played in the Series, much less have won one, there was quite a lot about this year’s bunch which intrigued me when I saw them beat the Yankees in the ALCS. First off, the influence of Rangers president and part-owner Nolan Ryan is unmistakable what with pitchers Cliff Lee and Colby Lewis going deep into late innings. Ryan is old school, back when a reliever was something you took for a sore shoulder. Texas also had some offense that kept the Yankees at bay in all but two games. Plus, it was also a kick seeing the Multimillion-Dollar Man Sir Alex Rodriguez with a dismal 4-for-21 performance in the six games, his long-ball prowess saved for perhaps some other seasons of the Yankees’ pissing millions away. I bear no ill will against A-Rod, just the fact that he played for the Rangers like teammate Mark Teixeira makes them natural villains in the Rangers world. No one except some truly sick individual would have wished Teixeira the pulled hamstring he received running out a ground ball in Game 4. But  you have to look at “Tex’s” performance over all in the ALCS to realize just how much the experience must have sucked for him, the injury topped off by his going 0-for-14. That happens to be the worst non-hitting streak for the Yankees in their post season history, according to ESPN.

The Rangers are packed with a pretty amazing and interesting group of individuals as well as saddled with a history that might leave one shaking their head for quite a bit. As for the San Francisco Giants, I couldn’t tell you jack about them except that Barry Bonds the “home run king” played for them as did a really dynamic player by the name of “Say Hey” Willie Mays. He is one of the old timers back in the days of Maris, Mantle, Koufax, Bob Gibson, and Boog Powell (can you imagine being called Boog?)  that I loved to watch play on the old black and white. Nolan Ryan was, if not in reality then in spirit, at the tail end of that generation.

Such a big game means a lot of sports and other types of writers have to start earning their keep finding stories relating to Texas, the Giants and the World Series. Some of these stories will be good and some, well perhaps not as interesting as they are in the minds of the writers and editors.

Nevertheless, this is a Series I relish, perhaps with pickles and mustard and wiener on a hot dog bun. Even if  I miss a game.