The Department of Veterans Affairs will begin processing payments tomorrow for the new Post-9/11 GI Bill. The new veterans bill was designed to augment current veterans benefits such as those found in the Montgomery GI Bill, which was a de facto post-Vietnam era bill. Veterans will also have the ability to transfer benefits to family members under the legislation.

The improved benefits are expected to help nearly a half-million veterans and their families attend college next year alone. Almost $80 billion for these benefits will be paid out during the next decade.

I am happy to see an improved GI Bill to help the younger veterans and their families. Still, I can’t help but think this crop of veterans are getting shafted compared with what I had for the GI Bill and the economic situation of the times that I used them to attend college.

When I started college in 1980 I was under the post-Korea and Vietnam era GI Bill. I got a check every month I attended school. Since I was single the amount I received was $327 per month for a full load of 12 hours. That amount increased to $376 by the time I graduated in 1984. That doesn’t sound like much, but consider that tuition at state universities in Texas was $4 per semester hour during that time period, plus the fact that I worked full-time as a fireman, and one can see how I made out.

I remember on at least one occasion and perhaps maybe it happened more often than that but I received my monthly check and was able to pay tuition, fees and books for that semester just by using my monthly stipend.

A year after I graduated I returned to my alma mater, Stephen F. Austin State University, with thoughts of getting a graduate degree. Since I had only a minor in political science, which was the field I had locked onto for a possible master’s, I had to first take a few more hours to get my second bachelor’s in that field. By that time tuition had jumped to a whopping $12 per semester hour.

Looking at my old school’s Web page with its tuition calculator I see that for a full load during the upcoming fall semester the tuition is $50 per semester hour, then you start looking at fees, room and board if you live on campus, etc., and the numbers start increasing.

Even adjusting for inflation what I spent back then for various costs were a steal. In today’s dollars I would be paying $196 a month for the one-bedroom apartment I rented when I started college.

It is no wonder that when I look back on the days I went to college that I felt somewhat rich. Little wonder I feel that way since the Bureau of Labor Statistics Inflation Calculator shows that the amount I was making in combined salary and GI Bill would be more than $39,000 in today’s dollars. That’s pretty good buying power for a college guy.

So today’s veteran, when someone tells you the college they are selling is bargain then perhaps it might be. But it certainly isn’t the bargain that I had when starting school almost 30 years ago.

If you are going to the Department of Veterans Affairs complex in Houston beginning Wednesday, July 29, you better have some official VA identification — either for employee or patient.

Houston VA officials said in a press release hot off the mojo wire this afternoon that all vehicles entering the complex will be stopped and occupants will be required to show some form of  VA identification. Required is a VA identification badge, VA parking tag, veteran identification card or an appointment letter.

The massive ID check for the busy complex which includes both the VA Regional Office and the Michael E. DeBakey Veterans Hospital is an attempt to reduce unauthorized  parking at the center, which is located in Houston’s busy Texas Medical Center.

Anyone who has ever been to the Houston VA hospital can appreciate the difficulty in finding parking, especially in the mornings. This seems to be a problem at many VA hospitals. But such an identification check does raise questions. If the check is at the entrances to the center, what effect will it have on traffic, especially those cars headed on Holcombe Boulevard in the mornings for the many different Houston hospitals? What about the veteran from Podunk, Texas, who left his appointment letter at home, 100 miles away? What about the veteran who is going to the VA for the first time to enroll for services and has no ID, only his proof of military service? Finally, what about the many veterans who are not going to see this little notice because the majority of the news media, especially outside Houston, are not going to report such information?

It kind of makes you wonder. But hey, I did my part. If you have any questions, call the Houston VA police through the main hospital number, and good luck getting through. It can be quite challenging to call someone at the Houston VA hospital. Then again, patience is a necessary virtue for VA patients. 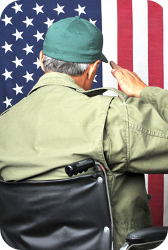 Congress — on occasion — passes laws that have some good or at least a good intention.

One would hope, at least, some good intentions spurred lawmakers to add riders to the Defense Authorization bills in 2008 and 2009 which expanded the ability for veterans who are not in uniform to render a hand salute.

In the past, only members of veterans service organizations who wore their organization’s official headgear were traditionally allowed to hand salute during the National Anthem, according to an article on Military.com. Veterans and other civilians not in uniform  — likewise a tradition — normally place their right hands over their “hearts” in lieu of a military-style hand salute for the playing of the anthem and other flag-related activities.

Thanks to an amendment in the 2008 Defense Authorization Act retired military members and veterans can now give a hand salute whenever the U.S. flag is raised, lowered or passes.

A 2009 amendment to that fiscal year’s defense bill allows out-of-uniform military personnel and veterans to render a hand salute during the National Anthem.

Now the growing number of people in the U.S. who have no connection whatsoever with the military and even some veterans themselves might wonder why would such a law be passed?

The answer is that there was  obviously some sentiment among veterans and military retirees, not to mention some of the powerful veterans organizations, for codifying such a practice. Why? I don’t know. It seems as if the law lacks some practicality insofar as enforcement is concerned.

Let’s say you are at a high school football game. The National Anthem is played and the colors are presented on the field by the local Junior ROTC drill team. You, the veteran, are wearing a big pair of horns on your head because your team is the Longhorns. Now do you do the hand over your chest or give the military hand salute?

Okay, say you give the hand salute. A local cop sees you comes over and starts grilling you about being in civvies and giving a military-style salute. You say it’s legal now. The cop said he never heard anything about it. You say: “Trust me.” The cop says: “Okay. I’ll trust you if you can show me some ID proving you are a veteran.”

Now one might think such a request would be easy. But it isn’t necessarily all that simple.

You, the veteran with the longhorn hat, spent your four years and got out of the service. You have your DD-214 form which proves your service — somewhere — although it is not on your “person,” as the cop who questioned you might say. You didn’t retire from the service so you don’t have a military retiree ID card. You don’t go to the VA for health care so you don’t have a VA identification card. You don’t belong to the VFW, American Legion, DAV or any other veterans organization. Basically, you are SOL to use a good old military acronym until you call up the county clerk in the next state where you filed your DD-214 after getting out of the service and ask her to send a copy to the local authorities.

Now that scenario about the ball game and the hassle by the cops and all the trouble is a lot of hyperbole. Heck, I have no idea as to whether there even is any enforcement mechanism in laws which let you honor the flag with that sharp, five fingers (if you got ’em) salute with the tip of your index finger next to the right eyebrow.

If I ever gave a military salute, it would probably be in a situation in which other veterans might do the same thing, say at some kind of veterans program or maybe a funeral with military honors.

Personally, I have always thought the hand salute is pretty cool. It is a sign of respect unlike so many others, which carries with it non-verbal cues aimed toward the object or individual one is saluting.

So just remember when you see a civilian saluting the flag or during the National Anthem that Congress gave this man or woman the right to wear their civilian clothes and give a good old military-type hand salute, one each, because of the sacrifice these folks made for their country. As to whether they are really veterans, I guess you’ll just have to take it on faith. Or ask to see some ID, at your own risk. You certainly wouldn’t want to get gored by those horns.

Remember the story the other day about thousands of Department of Veterans Affairs patients being exposed to HIV due to contaminated equipment used in colonoscopies? Well, there are new developments, good news and bad news if you will.

The VA reportedly warned patients recently at hospitals in Murpheesboro, Tenn., Miami and Augusta, Ga., “who had colonoscopies as far back as five years ago at those hospitals that they may have been exposed to the body fluids of other patients and should undergo tests to make sure they haven’t contracted serious illnesses.” Hey, thanks for telling us in a timely manner!

Seriously, many problems which are often discovered at VA facilities can usually be found at any type of hospital. However, the VA system is so massive that they can’t afford to let such screw-ups take place and then wait for years to sound the alarm.

These discoveries are the first major crises to face the VA’s new secretary, retired U.S. Army chief of staff Gen. Eric Shenseki. I certainly hope that his reaction will not to name a “blue-chip panel” to study the problems to death for when you have so many people possibly exposed and the contamination goes as far back as five years time is not your most abundant commodity.