The police here in Beaumont, Texas, are looking for the guy pictured in the surveillance camera. Yep, he robbed a bank. He doesn’t look much like a bank robber, does he? Although,  I am not sure how your typical bank robber should look.  If fact, except for the fact that he has acne that I’m sure you can’t see, our holdup guy could be just about anyone. Well, not anyone. I am being literal here. But, that he does look like he could be about any slightly overweight, balding white guy and that he makes no attempt to hide his face are among the quirks of the case that make it somewhat unusual, the police have told local media. Another odd aspect was his demand for the loot. 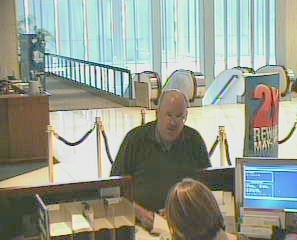 The robber walked into the Capitol One Bank in downtown Beaumont Monday afternoon and handed a note to a teller demanding $3,000 in cash, according to a report by KFDM-TV Channel 6. Later news reports by other local media and in information released by the local Crime Stoppers organization did not mention a specific amount. That is not unusual as police are hesitant to give out to the media what they consider to be specific “facts” of the case. In the event that such facts might only be known to the suspect then that is understandable. However, after the cat is out of bag and the police say they don’t want  that information used and news media do not report it is a crock. I’m not saying that happened here, I am just speaking from past experience.

The real “fact” is that cops sometimes don’t want to give anymore information than they have to, often to their detriment. The reasons vary.

There is, the aforementioned, reason of not wanting to give out facts in which only the perp or those involved somehow in the case know. Then reasons vary from the fear of pissing off a boss to just being a control freak. I think part of this whole sordid mess of how police information makes it to the public has for years been driven into the nation’s psyche through scores of novels, movies and television shows. It is a shame because I think it undermines the responsibility all parties have in making our system of crime and punishment tick. When I was working as a reporter, I had editors who have said: “It’s not our job to help the cops.” But, in a specific way — that role of being a citizen — we have a duty to society which we occupy long before we become reporter or cop. And if we are lucky, will possess long after we no longer do those jobs. Okay, enough civics lesson for one day, but what else was I going to write about?

Back to Mr. Everyman Bank Robber, the $3,000 seems in the end to appear as a significant aspect in this crime. Even if someone doesn’t know who this guy is, they might know the back story of specific amount of  do-re-mi. It might be what gets this otherwise normal-looking fellow arrested if he doesn’t turn himself in, get caught trying to pull off another robbery, or whatever.

It will be interesting to find out what this man’s story is and it is likely we will. People don’t get away with bank robbery by leaps and bounds these day. Don’t spend your money all in one place, dude.