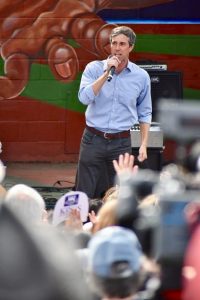 The Beto O’Rourke campaign for governor has added at least one twist rarely seen, at least in Texas.  Ed Sills of the Texas AFL-CIO reports that the O’Rourke team has ratified a union contract. The unionizing of some 129 staffers includes organizers, canvassing staff, press people, schedulers, and other staff.

The contract introduces overtime pay, a five-day work week, paid time off to vote early, severance pay, gas stipends and an additional week’s salary as a bonus if O’Rourke wins in November, said the Sills article on the state AFL-CIO website. It also includes important clauses on safe working conditions, parental leave, protections for immigrant workers, and establishes arbitration and grievance procedures and other positions. The political campaign union affiliations are a first in Texas for a statewide campaign.

The contract was bargained through the Office and Professional Employees International Union Local 277.

“We want to send a message that every worker in this state should have the right to demand better wages, benefits, and working conditions. We want to join them in that fight,” said Rocio Durney, union campaign organizer.

I don’t know how many professional politicians will like such a development, as political staffers are notoriously well, well-not-so-well paid. I will say, as well, that I am an unapologetic liberal and a current dues-paying member of a federal worker’s union even though I am retired from the U.S. Department of Labor. I also am a member of the International Association of Fire Fighters Alumni, having been a charter member of a firefighters local in East Texas. I was a vice president of both labor organizations although I like to tell people I was more nice than vice. Most of the time, that is.

One Reply to “Beto campaign staffers pay their (union) dues”