So far, the Supreme Court nomination hearings for Sonia Sotomayor seem as placid as expected. Some might even say they are “boring.”

Certainly what little of the hearings I saw this morning before work was anything but riveting. The Q and A back and forth between potentially the first Hispanic woman on the court and Republican Sen. Orrin Hatch of Utah appeared as if it was practice for a bar exam.

The senators on the Judiciary Committee – both Republicans and Democrats – are getting their little digs in so they can show the folks back home they are “tough by God.” However, little that is asked raises much that normal folks can get their teeth into and Sotomayor didn’t get to where she is today without learning to evade or turn into legalese such questions.

The one moment I am waiting to see is whether New Haven, Conn., firefighter Frank Ricci testifies as a witness for Republican ranking member Jeff Sessions. Ricci was the lead plaintiff in a reverse discrimination suit over hiring blacks and Hispanics who lacked the scores on a test for promotion to fire department lieutenant.

Sotomayor and a majority of the 2nd U.S. Circuit Court of Appeals sided with the city but the case was overturned by a 5-4 majority last month by the Supreme Court.

Since that decision Ricci has been touted by conservative talking heads as a hero for white men everywhere. However, some liberal groups recently began asking media outlets to investigate Ricci’s background in which, it turns out, the firefighter appears to be a serial litigant. His first lawsuit was at 20 when he sued New Haven for not hiring him as a firefighter, claiming the city discriminated against him because he had dyslexia.

Hatch mentioned what he called a “smear campaign” against Ricci today. He sought and received assurances from Sotomayor that she had no hand in such a campaign.

Nevertheless, and regardless of how you feel about discrimination or affirmative action, the fact that some of the far right chose Ricci to be their poster boy to blacken the eyes of President Obama’s first judicial pick is one more example of how the right wing seems to be puttering about on a rudderless ship.

Everyone should have the common sense to know that in politics, people who live in glass houses shouldn’t store thrones, or throw stones even. This time it seems as if the liberal supporters of the high court nominee has come with a stock pile of rocks.

Do you know the ultimate refrain in all of Paranoia Land?

Why it is, of course, “But they’ll do it while we aren’t looking.”

That is to imply that all appears well but somewhere, someone is surreptitiously plotting the worse case scenario which is to be thrust upon us all at a time of maximum surprise.

Such seems to be the best argument so far by those who oppose any Obama administration plan to revamp the nation’s health care system.

The major strike against health care reform from the most ardent of critics seems to be both the tired and worn threat of socialized medicine. Such threats have been lurking from the shadows for several generations now and except for the system which I am forced to use for health care – the Department of Veterans Affairs – a socialized system has yet to arrive.

In fact, what Obama says that he wants in health care reform seems anything but radical. For instance:

I have come to make peace with the socialized system that exists within the VA. That doesn’t mean I like everything about it. In fact, so much can be improved that would make for a more fair and efficient system. And when I see something that I don’t like or I feel is unfair, I fight it. That is the only way one can ensure they have any kind of chance for care which is rightfully theirs.

With that said, I certainly wouldn’t want to see any type of government-controlled and operated health care for the civilian population. But I think the only way that could logically take place is as explained through that old paranoid refrain: “But they’ll do it when we aren’t looking.”

Hell, for that matter, I think socialized medicine in the U.S. Is such a stretch that “they” would have to do it while we all are comatose.

One would think for all the tough talk that some of this nation’s Republican leaders can blow out their wazoos that they would have skin like their mascot elephant’s.

That doesn’t seem to be the case though.

I saw the oversensitivity of George W. Bush in person and on television many a time, especially when I covered his Texas gubernatorial press conferences.

Ultra-conservative pundit and de facto GOP leader Rush Limbaugh has made his whole radio persona based on his inability to take criticism.

And it seems that since the time she was nominated as Republican vice presidential candidate up until the present, Gov. Sarah Palin has become that quintessential Alaskan whine.

At every step Palin — whose PR built her as a rough-and-tumble jock, hockey mom and wilderness outdoorswoman — has found a target for blame when her situation went awry. Primarily her target has been the media although she has found others on which she could play the victim such as the spat between her and David Letterman over a crude joke the latter made and later apologized.

Now that Palin is leaving office, she has threatned several blogs as well as MSNBC and The Washington Post with defamation lawsuits over the possibililty her resignation might have been connected to ethics investigations. I thought Conservatives were against frivilous litigation.

Even with Palin leaving office it would seem her victory in specious defamation suits would be highly unlikely even though it could prove expensive for plaintiffs, at least in the beginning.

One has to believe that some of those ultra-conservative Republicans who talk tough and feel the solution to any problem is dissolving taxes and government while unleashing nuclear bombs on our real or perceived enemies suffer from a bad case of the “Can Dish It Out But Can’t Take Its.”

Of course, I’m no political consultant or expert. I’m just a guy articulating my opinion out loud, and mostly to myself. But if I had any advice for some of the Sarah Palins in the world who feel blaming others increases their own stature, it would be this: Please don’t utter any lines urging others to buck up and take personal responsibility.  We are used to hypocrisy in government, especially by your ilk, but sometimes you can only take too much of a good thing so far. 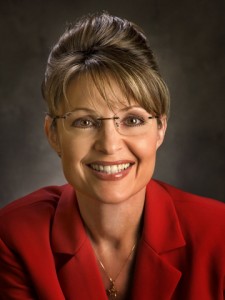 Sarah Palin, who was part of the losing Republican general election ticket fronting Sen. John McCain, announced she is resigning as governor of  Alaska.

Palin said during a rambling speech Friday that she could take the lame duck route which would finish out her first term, but sees that move as “politics as usual.”

“My choice is to take a stand and effect change – not hit our heads against the wall and watch valuable state time and money, millions of your dollars, go down the drain in this new environment, Palin said. “Rather, we know we can effect positive change outside government at this moment in time, on another scale, and actually make a difference for our priorities – and so we will, for Alaskans and for Americans.”

Several TV talking heads on cable news this afternoon saw the move as “odd” and “flaky.”

CNN contributor and veteran Republican operative Ed Rollins viewed the resignation with suspicion. He pointed to the timing of the announcement — the Friday of the July 4 weekend. While many suspect Palin’s leaving as a prelude to a campaign for the Republican presidential nomination in 2012, Rollins said the move sounds as if there is more to it. For instance, in the perpetual debate during presidential election over experience, Palin would now find herself as having not fully served out one term as governor.

Who knows what fate has in store for Sarah Palin? Perhaps she will move to Texas in order to hook up with our pretty boy Gov. Goodhair Perry and push for secession from the union. Uh, Sarah how about going to some other state to do that?